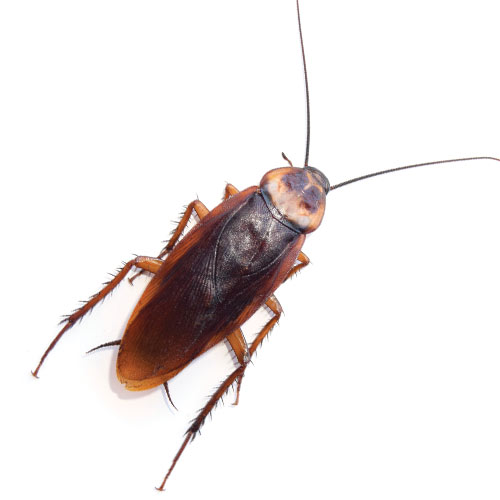 Our cockroach elimination program consists of  1 – 4 treatments depending on the level of infestation.

Our chemicals are made up of 99% food-based ingredients; safe to use around children, the infirmed and pets. Does not contain foul odors or stain causing ingredients.

Cockroach, common name for an order of insects, the most familiar of which are characterized by their oval shape, foul odor, and their status as household pests. About 4000 species are known worldwide; most inhabit the warm tropical regions of the globe. About 25 species have attained worldwide distribution due to accidental transport in commerce and their affinity for human habitation. Among these are most of the important pestspecies. Cockroaches are an ancient group, having changed little in appearance in 320 million years. Fossil records indicate that they were the predominant insects during the Carboniferous period 360 to 290 million years ago.

German cockroaches adulterate food or food products with their feces and defensive secretions, physically transport and often harbor pathogenic organisms, may cause severe allergic responses, and in extremely heavy infestations have been reported to bite humans and feed on food residues on the faces of sleeping humans. In addition, some scientists suggest that German cockroach infestations may cause human psychological stress and that the stigma associated with infestations alters human behavior. For example, people with infested houses do less entertaining, and avoid the kitchen at night for fear of encountering a cockroach.

Courtship patterns vary with the species. When the American cockroach is ready to mate, the female produces a chemical odor, or pheromone, that attracts males. The males flap their wings and probe for females with their abdomens when they sense the pheromone; eventually, they back into a female and mating ensues. Other species have more elaborate mating displays, including hissing noises, bobbing and waving of the abdomen, or nibbling. The males of one African species form dominance hierarchies, and the females preferentially mate with the dominant male.

The fertilized eggs that result from mating are cemented together by the female in a sausage-shaped egg case known as the ootheca. The American cockroach simply deposits the ootheca in a protected place and abandons it. German cockroaches keep the ootheca extended from their egg-laying organ, known as the ovipositor, depositing it only when the eggs are ready to hatch. An ootheca contains from 16 to 32 eggs, depending on the species. Female ootheca-tending cockroaches sometimes display maternal care. The nymphs that emerge from the eggs often remain around their mother for several days. Nymphs undergo gradual metamorphosis—that is, they grow and mature in stages, each separated by a molt of the exoskeleton. Each successive stage, or instar, comes to resemble the adult insect more and more. The final molt gives rise to a winged, sexually mature individual.