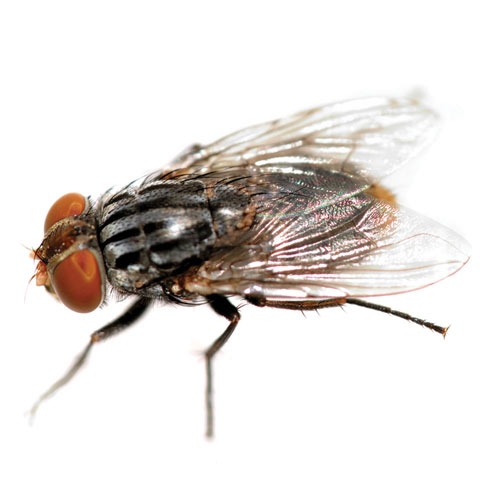 Fly, common name for members of an order of two-winged insects, the best known of which are the house fly and mosquitoes. Other familiar flies include crane flies, gnats, black flies, horse flies, and blow flies. Some four-winged insects are loosely termed flies, such as dragonflies, caddisflies, and mayflies. But true flies, which evolved from four-winged insects, possess only a single pair of wings; some are among the fastest flying insects.

Among the flies are some of our worst enemies. Some species destroy crops; they live as parasites under the skin of animals, causing myiasis (infestation of living tissue with fly maggots); and they carry such diseases as typhoid, anthrax, cholera, and dysentery. Certain species of black fly in Mexico, Central America, and Africa transmit the disease organism that causes onchocerciasis, or river blindness, in humans. Mosquitoes carry malaria, dengue fever,encephalitis, and elephantiasis. But most species are harmless to humans and play an important role in the balance of nature. They carry pollen to plants; they are an important link in the food web; and they hasten the decomposition of animal carcasses, manure, and vegetable matter. In addition, they consume a great many other insects. About 5,000 species of tachina flies prey on other insects, and are sometimes used as biological control agents in controlling injurious species. Flies are an important food source for many animals such as frogs and toads, lizards, and birds.