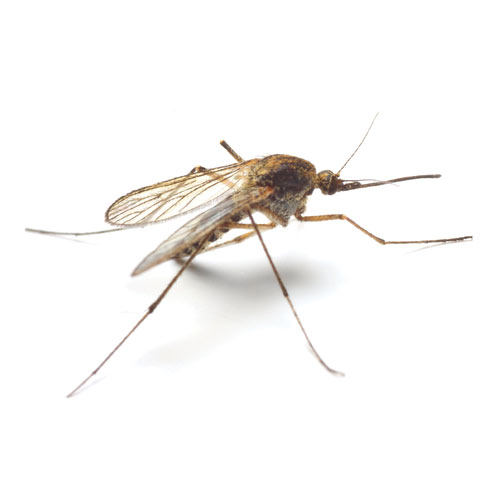 Mosquito, common name for any of about 2000 species of two-winged insects (see Fly). They are found from the tropics to the Arctic Circle and from lowlands to the peaks of high mountains. Mosquitoes have long, slender wings and are unusual among flies in having small scales over most of the wing veins. The body is narrow. The long antennae have numerous whorls of hair, short in the female and long and bushy in the male. In one large group of mosquitoes, the mouthparts of the female are long, adapted for piercing and for sucking blood. The male, which feeds on nectar and water, has rudimentary mouthparts. Females of this group prefer the blood of warm-blooded animals. When they bite, they inject some of their salivary fluid into the wound, causing swelling and irritation. Many inject infectious microorganisms and thus transmit such diseases as malaria, yellow fever, dengue, and filariasis.

Female mosquitoes lay their eggs only in water; some species lay their eggs in running water, others in woodland pools, marshes, swamps, estuaries, or in containers such as rain barrels. The larvae are known as wrigglers because of their wriggling motion in the water. A large number of mosquito eggs and larvae are destroyed by small fish. Mosquitoes may be controlled by eliminating their breeding places or by spraying these places with oil or insecticides.

The typical species is most abundant in warm regions. The common house mosquito of the United States is a carrier of encephalitis. Other species are responsible for the spread of yellow fever and dengue. Several species of a related group transmit malaria. This group is characterized by palpi, or sense organs, on the mouthparts that are as long as the sucking tube in both the male and the female. The wings of these mosquitoes are spotted with white and dark areas. These mosquitoes rest with the head and sucking tube parallel to the surface on which they are resting and with the body bent at an angle to this surface; other mosquitoes, including the common house mosquito, rest with the body parallel and with the head at an angle to the surface.

Another species, the Asian tiger mosquito, has caused health experts concern since it was first detected in the United States in 1985. Probably arriving in shipments of used tire casings, this fierce biter can spread a type of encephalitis, dengue fever, and other diseases. Hardy and resistant to pesticides, it may be difficult to control.