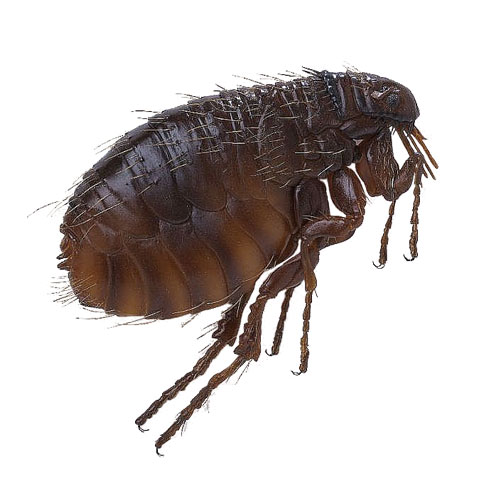 Flea, common name for small, bloodsucking, wingless insects. Adult fleas, which feed on the blood of their hosts, are surface parasites on the skin of humans and other mammals and, less often, on birds. Fleas are found all over the world. Their eggs are laid under carpets, in the folds of tapestry, in refuse piles, and in other places that provide safety and adequate nutrition. In 6 to 12 days the eggs hatch, becoming larvae with biting mouth parts. After a few days of voracious feeding upon organic refuse, the larvae spin cocoons and enter a pupal stage. The adult flea emerges from the cocoon in a few weeks. Adult fleas, which are slightly more than 0.3 cm (more than 0.1 in) long, have broad, rather flat bodies, short antennae, and piercing and sucking mouth parts; their eyes are either minute or absent. Their long, powerful legs enable them to leap relatively high into the air.

Several flea species infest household pets and domestic animals. The dog flea and the cat flea are two of the most common species, both of which are parasites also on human beings, poultry, and livestock. The human flea, the species frequently found most on people, is distributed throughout the world, but is uncommon in the United States. The dog flea, cat flea, and human flea are all intermediate hosts of a common cat and dogparasite, the cucumber tapeworm. Tapeworm eggs are deposited in fecal matter, and some of these eggs may cling to the hair of the primary host. Fleas swallow the eggs, which then undergo some development in the flea. If an animal or person accidentally swallows an infected flea, an adult tapeworm develops in the new host. The rat fleas, in the Tropics and in Europe, are important carriers of bubonic plague. The sticktight flea is another common pest, noted for its habit of clinging tenaciously to its host. Dog eczema is usually associated with the presence of fleas.

Fleas are controlled by destroying the adults and making breeding places unsuitable for larval life. Adult fleas are destroyed by bathing the host with strong soap and by applying insecticides or petroleum. These agents must be properly used to avoid injury to the infected animal or person.