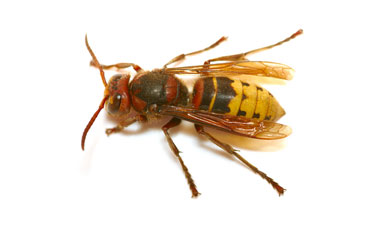 Members of a group of social wasps that make nests of papery material composed of chewed plant foliage and wood. The nest is often surrounded by a football-shaped paper envelope.

The bald-faced, or white-faced, hornet, widely distributed throughout North America, is about 3 cm (about 1.2 in) long and is black with white markings on most of its segments and on its face. Its gray nest is usually suspended from a tree limb. Yellow jacket is a name applied to a number of species that have extensive yellow markings. Yellow jackets construct their nests close to or under the ground; a single nest may contain up to 15,000 individuals. Yellow jackets are often found near humans, and their sting can be serious for people sensitive to their venom, or if a person is stung many times simultaneously.

The European hornet first appeared in the eastern United States about 1850. This hornet is reddish brown streaked with yellow and attains a length of more than 2.5 cm (1 in). Its brown nest is built in hollow trees, in rock crevices, or on human structures. Like the smaller hornet species, it eats insects and their larvae and ripe fruit.

In several hornet species, no workers are produced. Instead the female lays its eggs in the nests of other wasps, where the eggs hatch and the young are fed.

Nests: The stinging wasps rely on a nest from which they conduct many of their activities, especially rearing young. Wasp nests may be as simple as a straight burrow in the ground, like those made by the females of many digger wasps. Some wasp nests, such as those of mud daubers and potter wasps, are above ground, constructed of mud cavities attached to twigs, rocks, or human structures. The simplest mud nests contain only one or a few larval cells and are not used by the adults. Other mud nests contain many cells arranged side by side. Among the most intricate nests are those made of paper fibers collected from dry wood and bark and mixed with the wasps‘ saliva. The vespoid wasps (yellow jackets, hornets, and paper wasps) build nests of this type. In each paper-fiber nest there are one or more combs, or densely packed arrays of larval cells. The adults may congregate on the combs, and some nests have an outer cover, forming a protective refuge for the whole colony. This is the familiar “hornet’s nest” that may house hundreds or thousands of individuals.

Stings: All female stinging wasps can defend themselves and their nests by using their ovipositor to inject venom. Males do not have a stinger. No species will attack a human except in defense. If the colonies of some yellow-jacket and hornet species are disturbed, they may respond by releasing more than 100 defending wasps, each capable of delivering several stings. The nests of these species should be left alone or removed professionally if they are considered a nuisance. Wasp venom contains factors that release histamine, which dissolves red blood cells. Most people can survive many stings, responding with only temporary pain and swelling, but to hyperallergic individuals—about 1 percent of the population — a wasp sting can be fatal.
“Hornets, Wasps” Microsoft® Encarta® Online Encyclopedia 2009
© 1997-2009 Microsoft Corporation. All Rights Reserved.